Anaerobic digestion is the process

Anaerobic digestion is the process in which certain microorganisms decompose the organic matter into biogas without the presence of oxygen. The effluent biogas is composed mainly of the following compounds

The produced biogas is a colorless, odorless and flammable gas which has an energy content of 37.3 MJ/m3

The percent of m e thane to carbon dioxide varies depending on the input materials (feedstock) and the completeness of the process. The biomss used in this process has high moisture content, such as animal dung, sewage sludge, crop byproducts, and organic waste from household and industry.

The biogas process is a natural process that takes place in  a variety of anaerobic environments, such as the intestinal tract of animals, marine and fresh water sediment, sewage sludge, paddy fields, water logged soils and in the region of volcanic hot springs and deep sea hydrothermal vents.  Anaerobic digestion is also occurred in  the landf ill, where the municipal waste was buried in soil at very low oxygen concentration. The produced biogas (methane) can be collect by pipelines network and utilized as source of energy.

Anaerobic degradation or digestion involves the breakdown of bi omass by a concerted action of a wide range of microorganisms in the absence  of oxygen. The general principle of biomass is the degradation of organic materials (e.g.  carbohydrates,  protein and fats) under anaerobic condition, where bacteria convert the organic material to methane, carbon dioxide and water. Acetate is the most important  source of methane in the an aerobic environment; it formed approxim a tely 70% of the CH4, while, the remaining 30% of me thane is formed directly from hydrogen and carbon dioxide.
The first step in the anaerobic digestion is the hydrolysis of organic compounds into smaller units (e.g. the hydrolysis of proteins into amino acid). The hydrolysis process proceed s at various speeds depending on the com position of the biomass and may in some cases  be a rate  limiting step for the entire biogas process  (e.g. the hydrolysis  process will be rate limiting if  cellulose  is the main component in the biomass).

The second step is fermentation, where the hydrolysis products are absorbed by the fermentative bacteria. Th e products of fermentation process  are smaller com pounds (e.g. acetate, fatty acids,  alcohols and hydrogen). In a well functioning anaerobic digestion process, fermentative bacteria convert the largest part of organic materials to hydrogen,  carbon dioxide and acetate. The remaining part of organic matter will be transformed into other lower fatty acids and alcohols.The opposite figure will occur in case that the fermentation process is not functioning well.
The third step is the oxidization of fermentative products to acetate and the reduction of protons
to hydrogen. This reaction is called Acetogenesis and it is catalyzed by a special group of bacteria. During this process, a certain amount of energy is produced depending on the type of reaction occurred. At low hydrogen partial pressure, the energy yield from this  process is higher.
In the fourth step, interspecies hydrogen transfer is occurred. Hydrogen consuming organism s and hydrogen producing organisms are presented in the biomass. Both hydrogen consuming reaction and the hydrogen producing reaction will yield energy. The hydrogen concentration in the culture must remain within certain interval  in order to  make both reactions are running an d thereby producing m or e  energy. Growth of bacteria in f locks increase the absorption of nutrients compared with free living organisms  and thus make the energy utilization is m ore effective.  The fifth and the last stage is me thane formation. Acetate formed around 70% of the methane, while 30% is formed from hydrogen and carbon dioxide [3]. The different steps of biogas fermentation process are explained in simple diagram, 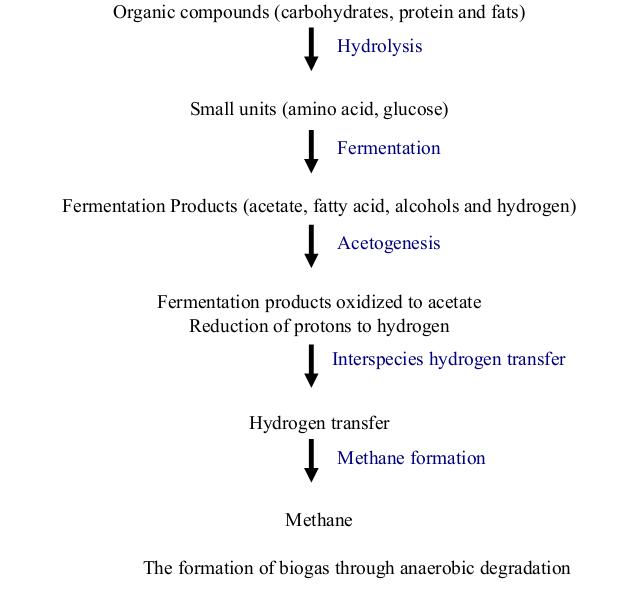